Fishers, Indiana, formerly known as Fishers Station and originally as Fishers Switch, came into being in June of 1872 when Salathiel Fisher divided his land into town lots. In those days it was common for new communities to spring up along railroads and Fishers was no exception, hence the early reference to a train station or 'switch'.

The railroad quite naturally drew residents and businesses to the area, the first of which was a gristmill and sawmill located approximately where the Nickel Plate restaurant is today. Fishers is located in Delaware and Fall Creek Townships in southeastern Hamilton County. 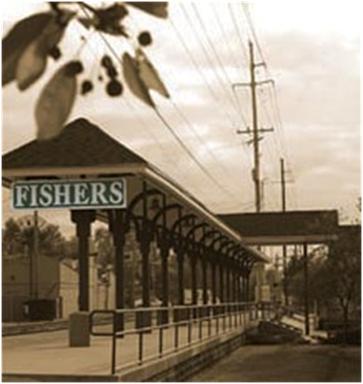 Most of the early history of Hamilton County centers on Delaware Township, which was acquired from the Indians when Indiana became a state in 1816. Hamilton County was initially divided into only two townships, White River in the north and Delaware in the south. Federal guidelines were set up for the orderly sale of acquired Indian Territory and the first land rush began.

At the time of the purchase, William Conner was the only white man living in Delaware Township. Operating a trading post, which is now the modern day Conner Prairie Interactive History Park, Conner's house was connected via Indian trail to Anderson and Connersville and by state road to Fort Wayne. Portions of this road later became present day Allisonville Road The first official wave of settlers came to the 'southeastern' area in the 1820's.

In 1823, Delaware Township was divided into three townships by adding Clay to the west and Fall Creek to the east. The railroad was constructed in 1851 and eventually extended to Chicago in the early 1870's when Fishers Switch was platted.

Fishers population grew slowly to 388 by the 1960 census when rail shipment declined. The relocation of Indiana highway 37 to the east side of town and the subsequent connection with I-69 insured the future growth of Fishers as a commercial and residential center. The Town of Fishers would soon become a fast growing suburb of Indianapolis. Fall Creek Township became the site of a consolidation of area schools when Hamilton Southeastern High School was formed in the 1960's.